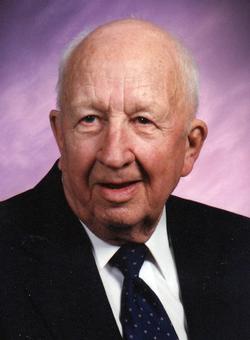 He was employed as a conductor for the Milwaukee Rail Road at Perry, Iowa for 40 years retiring in the early 1970's. Following retirement he moved to Sun Lakes, Arizona before moving to Lee's summit, Missouri in 2007. He was life member of the Elks, a member of Shrine Temple, and the United Church of Christ in Sun Lakes.

Bill was preceded in death by his wife Erma in 1999; two brothers, Starl Driskill and Howard Mac Driskill.

He is survived by two sisters, Lois (and Ernie) Ruzicka of Springfield, Missouri, and Cleta Rush of El Dorado, Kansas; a niece Carol (and Chet) Johnson of Lake Winnebago, Missouri; several other nieces and nephews; other relatives and friends.

Cremation has been accorded. A memorial service will be held 2:00 p.m. Saturday, August 23, 2014, at the funeral home where visitation will be held A½ hour prior to the service. Pastor David Driskell will officiate. Inurnment will be in the Strasburg Cemetery at a later date.

Memorial contributions are suggested to the Continua Hospice and may be sent in care of the funeral home.

To order memorial trees or send flowers to the family in memory of William Driskill, please visit our flower store.