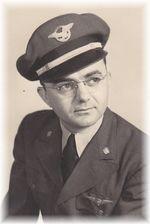 William "Bill" Harrison Sherwood, Sr., age 92, of Pleasant Hill, Missouri, formerly of Hillsdale, Kansas, was born Wednesday, May 8, 1918 in Arkansas City, Kansas, the son of Robert J. and Eula (Starkey) Sherwood. He departed this life at 8:55 a.m. on Friday, November 5, 2010 at the Appleton City Manor in Appleton City, Missouri.

Bill graduated from Arkansas City High School at the age 16. He then attended Arkansas City Junior College for 2 years and received an Associate's Degree. At 21 years old, he went to Alaska to become an aviation mechanic. Three years later he relocated to Burbank, California to work at Consolidated Vultee Aircraft Company. He worked as a test flight engineer on B-24's until 1945. The next 38 years he was employed with TWA as a flight engineer. He retired flying international routes on the Boeing 747.

He relocated to Hillsdale, Kansas, in 1952 where he purchased a farm and started a dairy operation with his family. This farm was taken for a federal lake and he relocated to his present farm at Pleasant Hill, Missouri in 1977.

Bill was a devoted Husband, Father and Grandfather.

He was also preceded in death by his parents and one grandchild Jason Grandon.

He is survived by his four sons Robert L. Sherwood and Bill H. Sherwood, Jr. both of Arlington, Texas, Don C. (and Jo A.) Sherwood of Pleasant Hill, and John A. (and Julie) Sherwood of Spokane, Washington; seven grandchildren Alyssa, Nikki and Sam Sherwood, and Andrea Kelsey and Charles Kelsey, Harrison, and Madeleine Sherwood; one brother Homer Sherwood of Houston, Texas; several nieces and nephews other relatives and friends.

Memorial contributions are suggested to Save-A-Connie and may be sent in care of the funeral home.

To order memorial trees or send flowers to the family in memory of Wm. Sherwood, please visit our flower store.